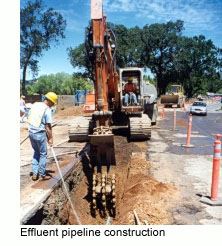 Wastewater reuse is a Special District's initiative to recycle treated effluent for the creation of wildlife habitats, irrigation of agricultural lands, and generation of geothermal power. Special Districts injection of effluent at the Geysers for geothermal steam production and power generation is the first of its kind in the world. The agency's goal is to maximize the energy, environmental, and economic benefits that wastewater reuse can achieve for Lake County.

The system's first phase delivers an average of 5,400 Gallons Per Minute (GPM) to geothermal injection wells operated by the Northern California Power Agency (NCPA) and Calpine Corporation. These industry partners have achieved a 70 MW increase in generating capacity since Phase 1 operations began. Phase 2 has increased effluent injection volume by approximately 20% in normal weather years, and by as much as 150% in drought years.